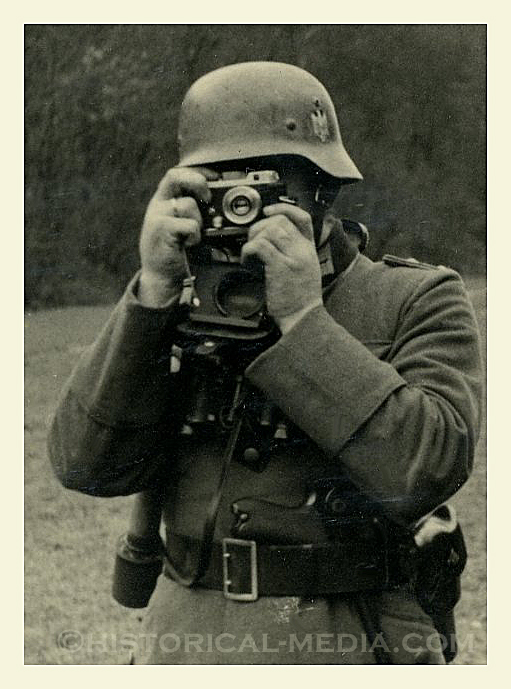 Now accepting Bank Transfers (Überweisung) - Commerzbank
Have albums or an entire collection to sell? We pay top prices!
We can also sell your item(s) here on consignment.
Our customer base and volume is unparalleled - worldwide!

2.  photos -  PANZER KNIGHTS CROSS Photo & Document Grouping
Grouping from Hauptmann Horst HAIN, Knights Cross Winning Panzer commander with Panzer AUfklarungs Abteilung 25. Comes with his Militarische Laufbahn - summary of his complete military career - awarded RK, Wound Badge in Gold as well as Panzer Assault Badge "50," several good photos of him including one taken after his unit taken into captivity in May 1945 as well as a super photo of him wearing leather assault wrapper! Rare grouping.
$375 - sold

3.  photos  -   Kriegsmarine Battleship SCHARNHORST KIA Document Grouping - Rare!
Very nice and complete document grouping named to Gustav LAAR. He was KIA on the Scharnhorst when she was sunk on December 26, 1943. Only 36 men were rescued, out of a crew of 1,968. Comes with the rare official "Gedenkblatt" of the ship, his official Heldentog document, High Seas Fleet Badge award enclosure letter for these documents when sent to his father, death notice with photo, Sterbeurkunde, document - official Scharnhorst printed issue!,several other documents and photos and also several pieces of Feldpost. Rare grouping!
$1165 - sold

4.  photos -  WEHRPASS & Rare JUMPCARD - Fallschirmjäger - NORMANDY!
Original Wehrpass and original Jumpcard named to Adolf BUCHHOLZ. he served in Flak units earlier in the war until transferring to the paratroops. His Jump card is great as it rarely survives! Shows all of his qualifying jumps for the Fallschirmjägerabzeichen! He served the Srab of the II Fallschirmkorps and was fighting in NORMANDY on D-DAY. The unit was virtually destroyed in the Fallaise Pocket. Super!
$450 - sold

8.  photos - German Army Photo Album, Wehrpass and more Grouping - 163 Inf Division - INVASION of NORWAY + Russia KIA
Nice grouping, all from one man. Note indicated it was purchased from man whose mother was married to the man. He was KIA in Russia. Named to Uffz. Karl KARGE. He served in Inf Rgt 324 through most of the war. He was posted in Norway during the Invasion of that country, fighting with the 163 Inf Div. It remained in Norway on occupation duty util subordinated to the Finnish Army during the Invasion of Russia. He was KIA on July 27, 1941. Album contains many photos of him in uniform, portrait photo, photos from his time in NORWAY, comrades graves KIA during invasion of Norway, also comes with large portrait, two pocket knives and more.
$385 - sold

13.  photos - US WWII Burg SONTHOFEN Photo Album
US GI photo album of the US Constabulatory School taking over the Ordenburgs Schule SONTHOFEN.
$75

18.  photos - German WWII Photo Album - SUDETENLAND, LUXEMBOURG, RUSSIA - Nice!
345 photos of a man who served in Inf Rgt 57 then Inf Rgt 116. Well captioned throughout. Starts with photos from his SA service, then RAD, then Army service. Photos from his service in the SUDETENLAND Campaign, good Standard & Fahnentraeger images, then photos form the West Campaign 1940 with many photos from LUXEMBOURG, identified locations in Luxemburg including EHLINGEN, ESCH, France TANKS captured and knocked out in Luxembourg, French planes, then photos of the Belgian border, French POWs, bicycle infantry, destroyed French towns, Panzers, PKWs, graves, identified locations in France including CHALON & Dijon, French colonial POWs, photos from PARIS, photos from a MOULIN ROUGE performance, then Russia Campaign, KO Russian T-34 tank, burning Russian villages, the man wounded on stretcher and the war is over for him. Graves of comrades including Waffen-SS portrait, great album!
$565

19.  photos -   Woman's YWCA Worker WWI Photo Album - AMAZING!
MASSIVE full leather album of a female YWCA worker stationed overseas during WWI. Named to Helen Martha Price. The album would have been significantly expensive at the time. All privately bound and embossed. Comes with numbers period newspaper clippings about her and her service, many original documents, she spent much time in KOBLENZ and there are many photos from there. She shared as billeting secretary for the YWCA. Interesting images of YWCA uniforms and insignia. Also comes with herID documents, many pieces of WWI ephemera, her Passport, many photos of her with soldiers, photos from England, original photos of GENERAL PERSHING, GENERAL ALLEN, portrait photos, aircraft and crews, in the back of the album are very nice large photos with many high personalities, all identified on typewritten sheets, Gernal LEJUNE, Sec Navy DANIELS, GENERAL AULTMAN, GENERAL LIGGITT, GENERAL NEVILLE, GENERAL MARSCHALL, and more. Great piece of history!
$1235 - sold

20.  photos -    US WWII 8th Air Force Photo Album - 91st BOMB GROUP - SUPER!
One of the best 8th AF photo albums we have offered. There is a very interesting letter to General Jacob DEVERS (ETO commander) to 8th AF commander General Ira EAKER dated June 1, 1943. This may be from one of their estates. The album is filled with fantastic photos, all from the 91st Bomb group. The previous owner added the modern printed captions. The photos are all wartime and the paper “slugs” are included with man. Many are Air Ministry tamped on reverse. There are many excellent photos of IKE visiting the base, many identified personnel, photos of other personalities including General SPATZ, medal ceremonies, great Nose Art images, painted A-2 jackets, crew photos, portraits, bomb run photos, squadron patches in wear, base images, and more.
$1650- sold

21.  photos -   Rare LUXENBURG Triple Marked Real Crusher Cap
The best REAL CRUSHER cap you will find! Triple marked - cross, band and also Eagle insignia (made in England, as well!). the first I have ever seen a triple marked crusher by this desirable maker
$475

22.  photos -    RARE US POW YMCA Diary - Captured in North Africa
Rare original POW diary of a 34th Division, 168th Infantry Regiment soldier captured in Tunisia at the battle of Sidi Bou Zid. Named to Alonzo EDWARDS. This was a battle that pre-dated the more well known Kasserine Pass battle. He was imprisoned at Stalag 3B Furstenberg.These are exceedingly rare to find, especially to someone captured this early in the war!
$900 (our cost)

24.  photos -   US WWI 82nd AIRBORNE Photo Album - ST MERE EGLISE photos!
Very rare complete album to an 82nd Airborne veteran. Well captioned throughout. Also comes with a Bevo German breast eagle he brought back. Named to Sgt John HARDY, veteran of Italy, Sicily, Salerno and D-DAY! Many photos taken in June 1045 but also some very rare photos of him at ST MERE EGLIESE in JUNE 1944!!, great photos of camo helmets in wear there as well as invasion flag brassards! also photos prior to D-Day taken in Ireland and England, and more.
$875 - sold

25.  photos -   WWII Airplane Photo Collection - US, British & GI Luftwaffe Photos
Binder representing one person's aircraft collection. Contains many good Allied photos but the highlight are the numerous US GI photos of captured and destroyed German airplanes - Me 109, Stuka Ju 87, Ju 52, etc. Many from north Africa. Also KO German tanks and tank destroyers, photos of US Gliders, US pilots and their planes, and more! Bargain priced!
$650

26.  photos -   British/ South African WWI & Boer War Officer Medal, Document & Original Artwork Grouping - TOP!
Fantastic named grouping to Capt. Harry McCormick. He served in the 6th MG Corps of the 2nd Division BEF. He was a POW of the Germans after being wounded and would die of his wounds on May 8, 1917. Comes with his original medals (one officially engraved) and other insignia, large binder full of documents, letters and amazing original artwork - really professionally done. The person I bought this from said he had heard the man was an artist at some point for Punch magazine. one can see how that would be true. Contains many letters he wrote to his girlfriend/wife (they both called each other "Billy"). Also comes with three additional scrapbooks with more artwork there is also original artwork he did during his tie fighting in the Boer War! Very nice portrait photo of him in uniform. the daughter daughter he had with Mary Sieveling went on to become a famous Boston ballet dancer and instructor. POW letter gives details of his wounding, capture and death.
$1365 - sold

27.  photos -   US WWII 82nd Airborne Glider Grouping - Great Portraits!
Large grouping to a named 82nd AB Gliderman who served in Co.K 325th Glider Infantry Rgt. Comes with his original camera and case, one scrapbook with much original foreign currency he brought back, a box with his 82nd AB insignia, watch, flashlight and other items, yard long photos, a photo album with many military photos of him and comrades in uniform. the best part are all the original studio portraits of 82nd Airborne personnel! Great shots!!
$600 (our cost) - sold

28.  photos -  US WWII B-26 PILOT Photo Album - Great Aircraft Shots!
Great album to a pilot in the 450th Bomb Squadron 322nd Bomb Group. 196 photos & postcards. Many captioned on the reverse side. great images of planes in flight formations, bomb runs, nose art, pilots in cockpits, tail insignia, life on base, identified locations and much more!
$685 - sold